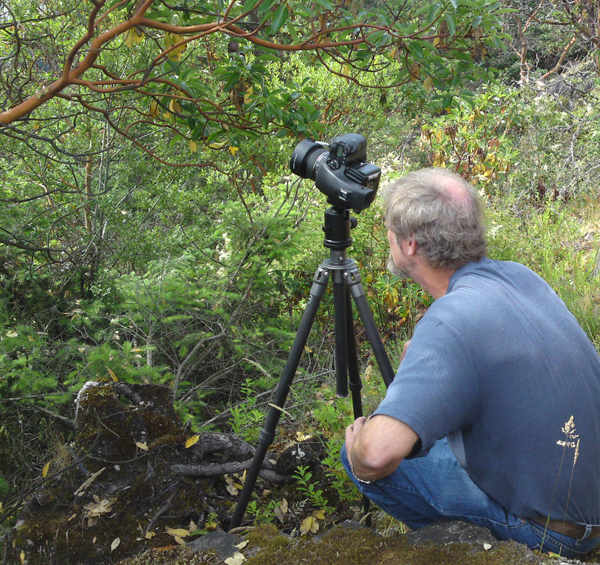 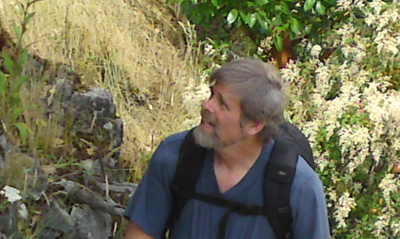 I remember, as a child in British Columbia, spending many long wonderful summers with my grandmother in the small Kootenay town of Nakusp located on an expansive portion of the Columbia River known as the Upper Arrow Lake. In the late 1950's and early 1960's there still remained large pockets of virgin interior rain forest. These ancient trees were hundreds of feet tall and measured 6 to 10 feet in diameter at their base. The woodland caribou were abundant. Large stately cottonwood trees ringed the Arrow Lakes which rose and fell with the natural rhythm of the seasons. This was my playground and my classroom. My natural sense of curiosity was my teacher. My childhood experiences have had a lasting effect in focusing my attention on the natural landscape. Here the plants and animals are like old friends because of my familiarity with them. The forest is my neighbourhood.

At present, the essence of much of my work is in the search for the manifestation of the strong spiritual presence which pervades the land. For me, this quality is very strong when in the midst of the ancient giant forests. The aura and spiritual strength of these trees becomes almost overpowering. Visually, the spiritual qualities of trees such as the yellow cedar of Meares Island are subtle, but still manage to mesh with the image to produce a feeling of strength and wisdom. Other observers have their own interpretations based on their own experience. My images portray feelings and moods that are not readily translatable into words.

I have been cultivating the art of abstracting images from nature for over 20 years. My skills are largely self-taught through experimentation, discussions with other photographers and the continual reading of technical books on photographic methods that interest me. My photographic eye is uniquely my own without any particular mentor or teacher. My association with the Western Photographic Circle since 1987 has given me significant motivation in the pursuit of technical excellence in photographic art through a monthly peer review of prints.

My current equipment is a Phase One camera with the P65+ digital back (a 60.5 megapixel chip which yields a raw file size of 40 megabytes). The processed raw image becomes a 340 megabyte TIFF file with a direct image print size of 22" x 29". My motivation for acquiring this system was the phenomenal image quality and the ability to have both colour and black and white from the same image; a direct to digital format eliminated the need to scan film; the current generation of Schneider and selected Mamiya digital lenses could at least match the image resolution of the P65+ digital back. The lenses I use currently include the Schneider Kreuznach 80 mm, the 120 mm Mamiya 645 digital macro and the AF APO 300 mm Mamiya 645 digital lens. I also use a carbon fibre Gitzo tripod with a Kirk tripod head and a very useful Kirk L-bracket. All my pre-2010 images were taken with a medium format Pentax 6cm x 4.5cm which was an ideal size and weight for packing around with my wooden tripod and (heavy) Gitzo tripod head. I used 3 SMC Pentax-A lenses: a 200mm; 75 mm; and 120mm macro. My meter was a Soligor spotmeter with a UV filter. The film was Ilford Pan-F.

A selection of framed original fine art prints is available for sale at my home/studio - call(604-988-3532) for an appointment.

The proceeds from the sale of my photography helps support my environmental research and advocacy work. I have a PhD in ecological genetics from the University of Liverpool in England and specialize in genetic ecotoxicology which translates into the genetic impacts of contaminants and pollutants on plants and animals. My research is supported from government grants, foundations and my own pocket.

My work has been widely publicized in the media (BBC, CBC, CNN, Globe and Mail, New York Times, Time Magazine, Manchester Guardian, The Observer and many others). I have published a number of papers in internationally peer reviewed scientific journals and have made presentations at major environment conferences (Society of Environmental Toxicology and Chemistry; Aquatic Toxicity Workshop).

Even with my publications and media blitzes, the genetic impacts of contaminants and pollutants are largely ignored by regulators because my work does not conveniently fit in to the current conventional risk assessment models. This is unfortunate, since many of the major diseases we face today (heart disease, cancer, multiple sclerosis) appear to have a genetic damage component potentially mediated by environmental effects. The implication of my work is that many of the current regulatory levels for genetically active chemicals would have to be substantially reduced to prevent genetic damage.

I have also investigated the contamination of biological and human food chains through my work comparing farmed salmon to wild salmon and pointing out the current inadequacy of the regulatory environment in Canada for PCBs which were found in excess in farmed salmon and their feed under the then current fish consumption guidelines. In the past, PCBs were dumped by the thousands of tonnes into the oceans and bioaccumulated up the food chain, especially in oily fish. I encouraged a severe restriction on the consumption of farmed salmon particularly by women of child-bearing age and, especially, pregnant women because contaminants become mobilized in the blood and are passed on to the fetus.

I have worked with Indigenous Nations whose very well-being is threatened by present or future environmental degradation because of present industrial activities such as garbage dumps and sewage sludge disposal from large urban centers. In today's world of extreme stress on Nature owing to man’s relentless pursuit of resources in Nature, one has to consider garbage and sewage sludge not as a problem, but as a resource for profit for power generation, food production, resource recovery (glass, metal and chemicals), biodiesel production, and source of alternatives to cement production. A whole industrial park producing products vital to urban living can be derived from society's garbage. There is zero waste. Even the carbon dioxide is utilized. All these processes utilize proven technologies that exist today and can help reduce the environmental footprint of the city as well as potentially eliminate the production of environmental toxins and greenhouse gas emissions from garbage and sewage. The latter beneficial consequences is what drives me to help with the amalgamation of these technologies as an integral part of urban infrastructure in a scalable form from small towns to large cities to combat both global warming and environmental toxins. My motto is if you cannot change the regulations then make the elimination of the problem safe (down to the genetic level) and profitable.